A late-season snowstorm dropped feet of snow in parts of Colorado, Wyoming, Nebraska, and South Dakota from March 13-14, 2021. Record-breaking snowfall was measured in Cheyenne, Wyoming and Denver, Colorado.

NOAA’s geostationary and polar-orbiting satellites monitored a low-pressure system in the region and followed its evolution into an historic storm. The satellites allowed scientists to forecast the storm’s path and intensity while providing early warning. Long-range forecast models, aided by data from the Joint Polar Satellite System satellites, predicted heavy snowfall for the region a week in advance. NOAA satellites also kept watch throughout the event, monitoring the progression of the storm and resulting snow cover.

Cheyenne received 30.8 inches of snow during the storm. The 22.7 inches that fell on March 14 broke the one-day record for snowfall in Cheyenne, set in 1979. Cheyenne recorded 11 straight hours of gusts topping 40 mph amid the heavy snow through the afternoon of March 14, meeting the criteria for a blizzard.

Denver International Airport measured 27.1 inches of snow, ranking as the largest two-day snowfall on record for Denver. It was also the fourth biggest snowstorm in Denver weather history dating back to 1881. Wind gusts of 46 miles per hour amid heavy snow were recorded at Rocky Mountain Metropolitan Airport, just northwest of Denver, on the afternoon of March 14.

The storm produced heavy, wet snow, which led to numerous power outages. Interstates and major highways were closed across the region and thousands of flights were canceled.

NOAA’s geostationary satellites, GOES-16 (GOES East) and GOES-17 (GOES West), and polar-orbiting NOAA-20 and Suomi-NPP satellites collected a variety of important data as the storm formed and throughout the event. These satellites carry advanced imagers with specialized channels used to detect specific features.

GOES satellites orbit 22,236 miles above Earth’s equator, at the same speed Earth rotates. This means they have a constant view of the same area and see storms in motion. The ability to track weather conditions as they happen aids real-time decision-making and short-term forecasts and warnings.

NOAA-20 and Suomi-NPP circle the globe from pole-to-pole 14 times a day, each imaging the entire Earth at least twice daily, from 512 miles above the surface. Because they are closer to Earth than geostationary satellites, they provide ultra-high-resolution imagery. The polar-orbiting satellites provide critical information for longer-term forecasts. Developers use data from the Advanced Technology Microwave Sounder instrument to create products like the snowfall rate algorithm, which detects the amount of snowfall and estimates its rate.

The forecast for large snow amounts was aided by GOES-17 imagery. Air mass RGB imagery shows an atmospheric river that carried moisture through the Southwest and fed the developing storm system in Colorado. The air mass RGB product combines water vapor and infrared data from the ABI to provide information on the middle and upper levels of the troposphere. This imagery also helps to distinguish between high and mid-level clouds. Warmer air masses appear bright green, while colder and drier air masses appear blue and brown, respectively. High clouds appear white in this imagery and blue areas indicate cold polar air.

GOES-16 and NOAA-20 snow/cloud RGB imagery captured deep and bright snow in the northern half of Colorado and southern Wyoming, including the Front Range communities of Denver, Boulder, Ft. Collins, and Cheyenne. Snow/cloud RGB imagery helps meteorologists distinguish between ice/snow and clouds. In this imagery, ice and snow are depicted as white, while clouds are yellow.

Measuring the amount of snow cover from space helps to understand snowpack conditions. Depending on the region, the snowpack can store several months of precipitation, which, when it melts, may release a season’s worth of precipitation in a short amount of time. This is beneficial when snow may be the single-most-important source of freshwater due to drought conditions. However, in other regions, the melting snowpack can lead to dangerous flooding. The ability to monitor and measure snow cover conditions is important to our daily and long-term wellbeing.

GOES-16 ABI imagery with a Geostationary Lightning Mapper (GLM) overlay showed lightning activity within the snowstorm in eastern Colorado. This data indicates that the convection in this area was strong enough to generate rare thundersnow conditions. GLM is the first instrument of its kind flown in geostationary orbit and its data can help alert forecasters that a storm is becoming more severe.

Residents in Colorado noticed a layer of brownish snow. This turned out to be dust transported from Mexico that was tracked using GOES-16 imagery. A low-pressure system brought gusty winds from the southwest, lifting the dust into the air and transporting it northward nearly 800 miles. Dust particles clung to the falling snowflakes, resulting in snow with a brown hue when it reaches the ground. In GOES-16 dust RGB imagery, a magenta streak highlights the dust. 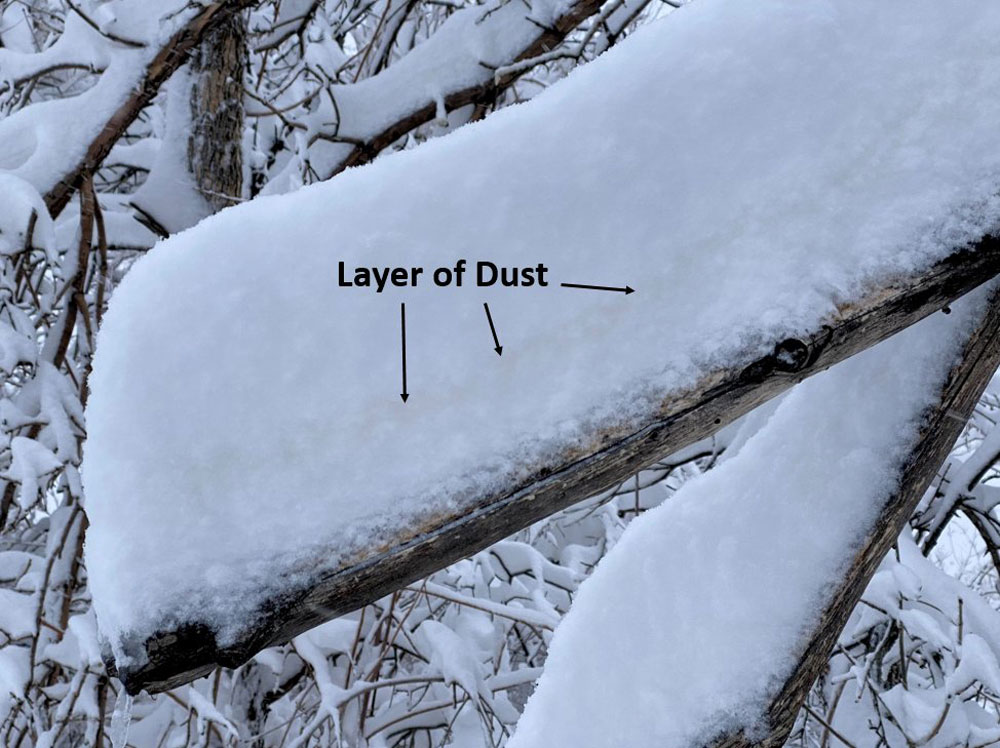 Layer of dust in the snow captured at the National Weather Service office in Boulder, Colorado. Image courtesy of NWS Boulder.

For this snowstorm, NOAA-20 and Suomi-NPP provided critical atmospheric data to accurately forecast the event a week in advance. GOES-16 and GOES-17 continuously monitored the area, allowing for real-time tracking and monitoring of the event. Together, they make a powerful team. Different vantage points, imaging frequency, and instrumentation provided complementary measurements for a complete picture of this historic storm.