GOES-T launched on March 1, 2022, and was renamed GOES-18 upon reaching geostationary orbit on March 14. Following a successful on-orbit checkout and testing of its instruments and systems, NOAA plans to put GOES-18 into operational service in January 2023, replacing GOES-17 as GOES-West. GOES-17 will be placed in on-orbit storage.

GOES-18 completed a “split” post-launch testing phase that placed the satellite into position near the current GOES-West location of 137.2 degrees west prior to the completion of post-launch testing. This allowed forecasters to have early access to operational Advanced Baseline Imager (ABI) data after Beta maturity validation during the “warm” periods that degrade GOES-17 imagery during the height of hurricane season. GOES-18. After completing post-launch testing in October 2022, GOES-18 was handed over to the NOAA Office of Satellite and Product Operations.

The drift of GOES-18 from 89.5 degrees west to 136.8 degrees west was completed on June 6, 2022. A slight reconfiguration of the nominal GOES-West orbit location occurred by nudging GOES-17 to the 137.3 degrees west location, providing room for nudging GOES-18 to the 137.0 degrees west location. From this location, GOES-18 will complete the remainder of its product testing and also provide an operational interleave of data. The interleave is the combination of GOES-18 ABI data "interleaved" with GOES-17 non-ABI product data (GLM, space weather instruments) via GOES-17 GOES Rebroadcast (GRB) and Product Distribution and Access (PDA). The first interleave period was completed Aug. 1 – Sept 8, 2022. The second interleave period began on Oct. 13, 2022, and will conclude on Nov. 16, 2022.

During interleave, all products are mapped to 137.0 degrees west and although all antennas should be re-peaked, only antennas larger than 7 meters will need to be repointed. NOAA plans for GOES-18 to assume the GOES-West role on January 4, 2023

Details as of Oct. 6, 2022
Please Note: The following dates are subject to change based on launch, on-orbit checkout activities, and operational needs.

The National Weather Service requested that the GOES-R Program distribute Beta GOES-18 ABI products during the August 2022 warm season. Interleaving is a method that allows the GOES-R ground system to merge data from multiple satellites into a single data-processing flow. Data to the AWIPS and GRB uplink can be configured to contain a mixture of data from GOES-17 non-ABI instruments or the GOES-18 ABI. The data will present to the user as a single GOES-West stream.

When interleaving, all product metadata will be maintained so the original source spacecraft designator will remain intact. Users will always be able to determine which satellite generated the data being accessed.

Once GOES-18 arrived at 136.8° W in early June 2022, vertically-oriented bars were discovered in some ABI Band 7 (3.9 μm) imagery that has not yet been mitigated as part of post-launch calibrations. The spatial pattern of the artifact is similar in appearance to a barcode.

This “Barcode Artifact” is most evident in colder scenes (e.g. at night and in cold cloud tops). When Band 7 is used in multispectral imagery involving band differences, such as the Nighttime Microphysics RGB, the barcode artifact is more apparent. 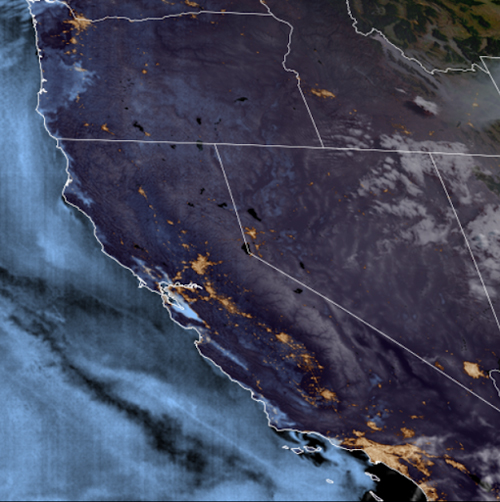 The “barcode artifact” can be seen in low liquid water clouds (colored blue) at night in this GOES-18 GeoColor product from July 21, 2022.

The GOES-18 ABI Band 7 “Barcode Artifact” is vertically oriented, distinguishing it from detector-level horizontal striping often seen in satellite imagery. This artifact is also different from the loop heat pipe anomaly-caused degradation seen in GOES-17 ABI infrared bands at certain times. The GOES-18 ABI cooling system underwent a redesign and NOAA and NASA are certain that this artifact is not related to the cooling system.

Engineers are investigating the root cause of “Barcode Artifact” in Band 7 as well as possible mitigations.

Products that may see impacts

Products that are unlikely to see impacts

Additional information and a number of imagery examples can be found in the GOES-18 Band 7 “Barcode Artifact” presentation.