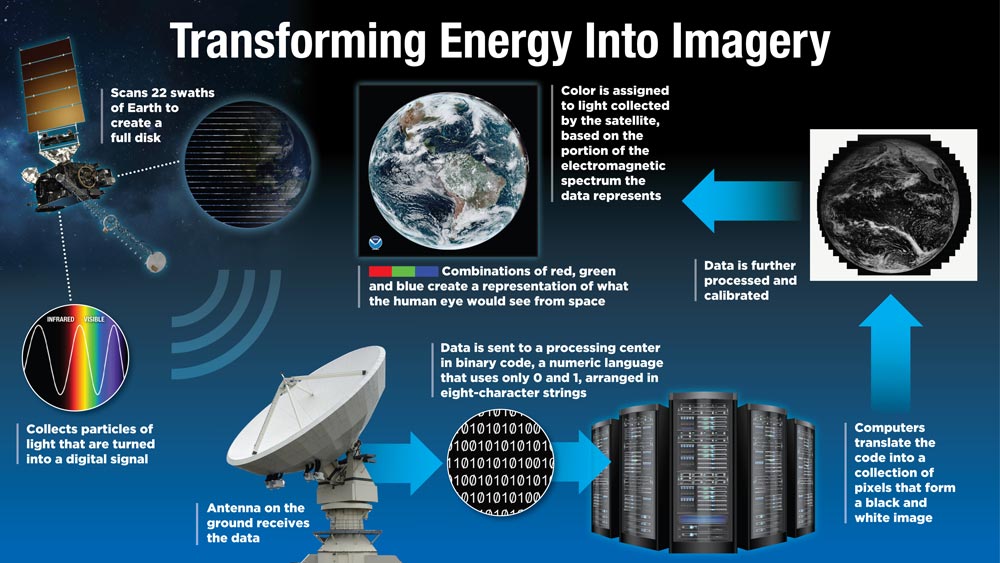 Satellites collect information about Earth using remote sensing. GOES-R satellites carry an instrument called the Advanced Baseline Imager (ABI), which measures energy at different wavelengths along the electromagnetic spectrum. Each of ABI’s 16 channels measures the amount of reflected or emitted energy in a specific wavelength of light along the electromagnetic spectrum to obtain information about Earth’s atmosphere, land or ocean. ABI collects these particles of light and turns them into a digital signal, which is transmitted to antennas on the ground. The information is then sent to computers at a satellite data processing center. This information is transmitted in binary code, a numeric language that uses only two digits: 0 and 1, arranged in eight-character strings that are understandable by computer software. Computers translate the code into a collection of pixels that form a black and white image. Color is assigned to the light collected by the satellite based on the portion of the electromagnetic spectrum the data represents. Combinations of red, green and blue create a representation of what the human eye would see from space. 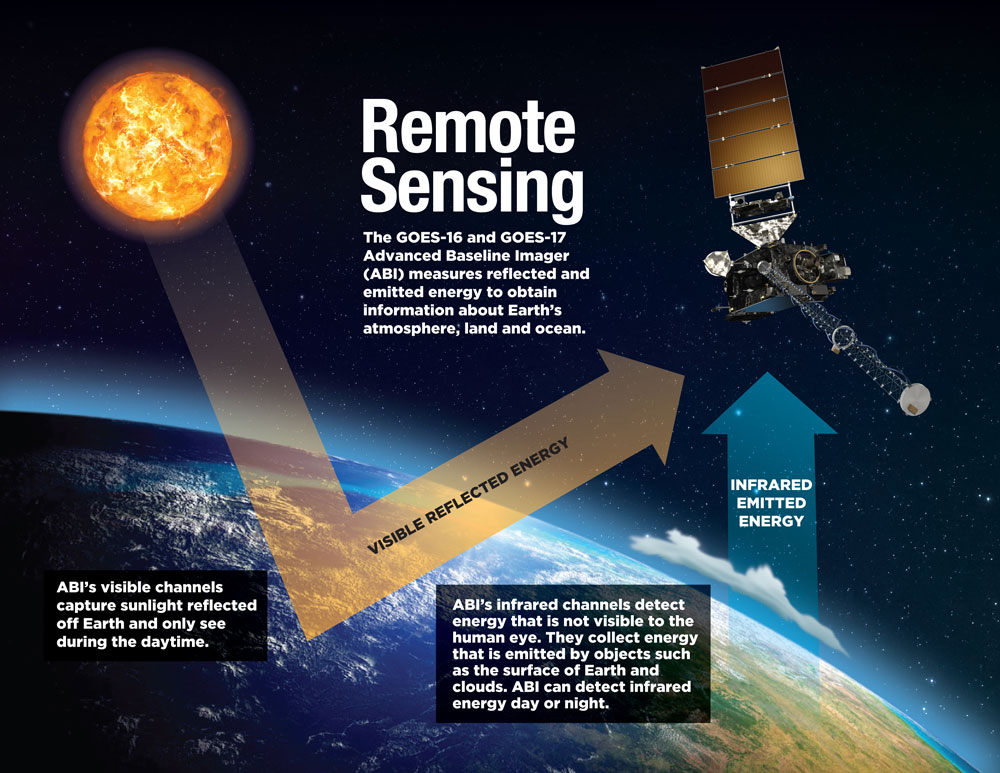 The GOES-16 and GOES-17 Advanced Baseline Imager (ABI) measures reflected and emitted imagery to obtain information about Earth’s land, atmosphere, and ocean. ABI’s visible channels capture sunlight reflected off Earth and only see during the daytime. ABI’s infrared channels detect energy that is not visible to the human eye. They collect energy that is emitted by objects such as the surface of Earth and clouds. ABI can detect infrared imagery day or night. 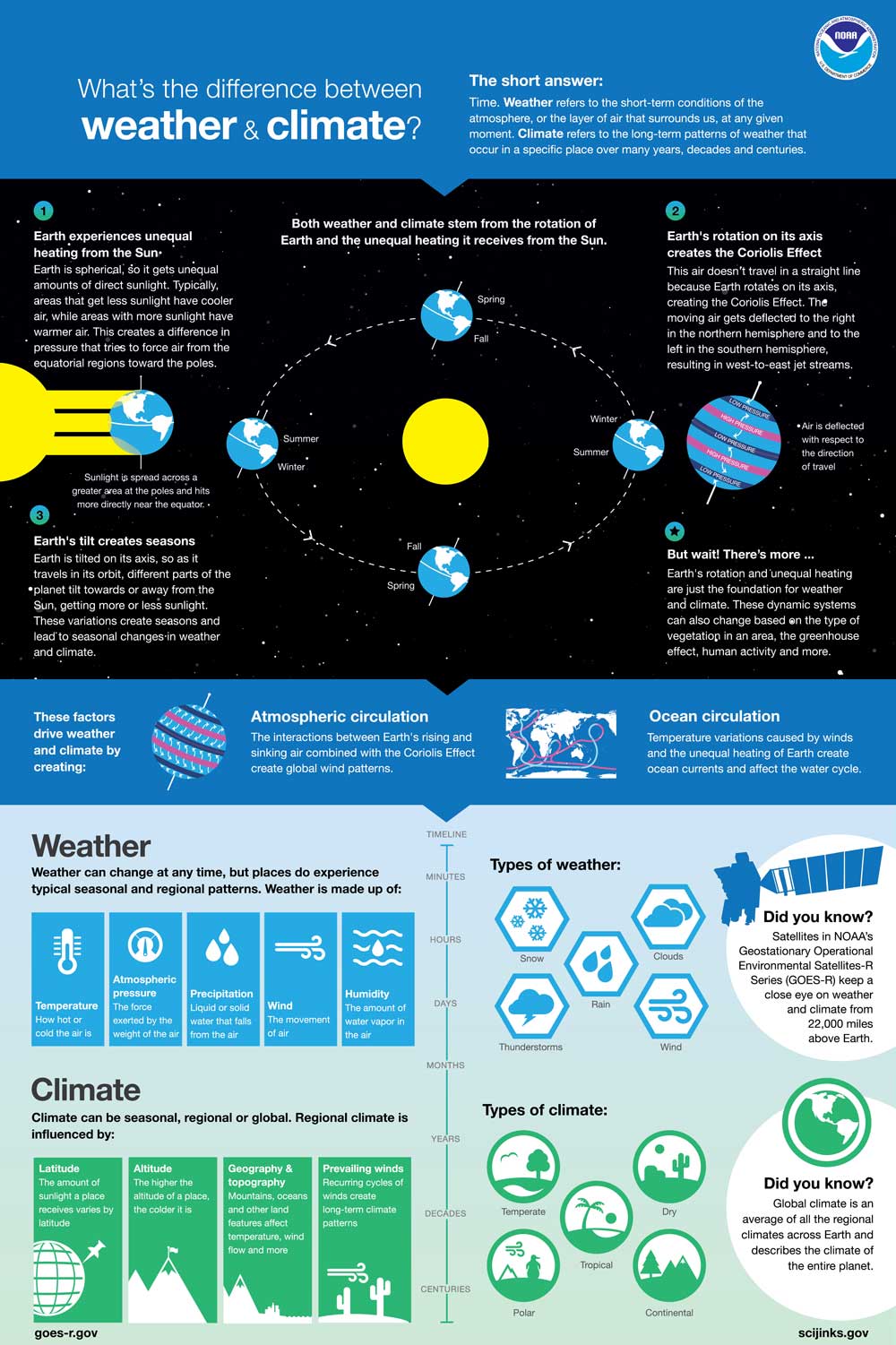 What’s the Difference Between Weather and Climate?

The short answer? Time. Weather refers to the short-term conditions of the atmosphere at any given time. Climate refers to the long-term patterns of weather that occur in a specific place over many years, decades and centuries. This new infographic explains the factors that drive weather and climate.

Download What’s the Difference Between Weather and Climate? infographic 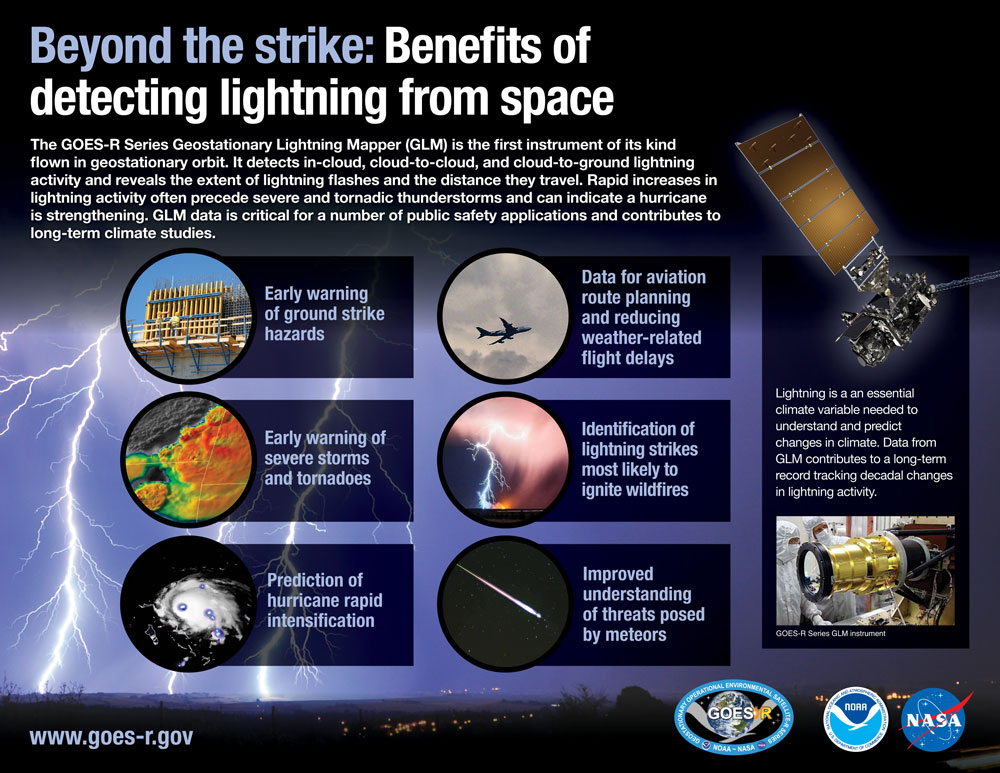 Beyond the strike: Benefits of detecting lightning from space

The GOES-R Series Geostationary Lightning Mapper (GLM) is the first instrument of its kind flown in geostationary orbit. It detects, in-cloud, cloud-to-cloud, and cloud-to-ground lightning activity and reveals the extent of lightning flashes and the distance they travel. Rapid increases in lightning activity often precede severe and tornadic thunderstorms and can indicate a hurricane is strengthening. GLM data is critical for a number of public safety applications and contributes to long-term climate studies.

Download Beyond the strike: Benefits of detecting lightning from space infographic 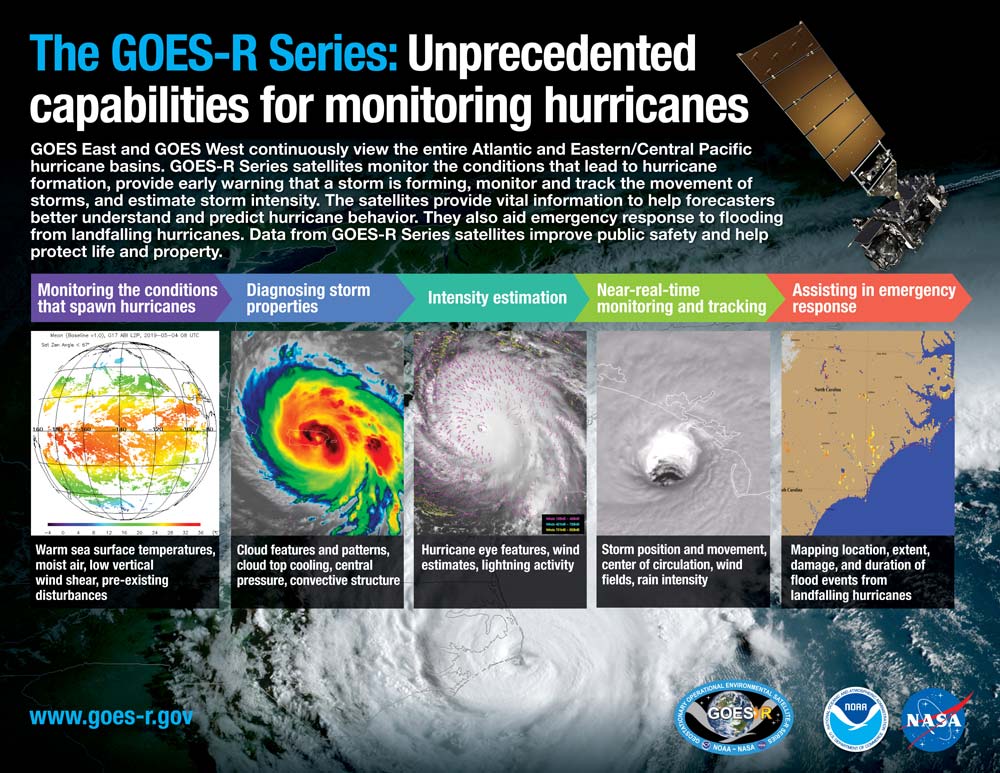 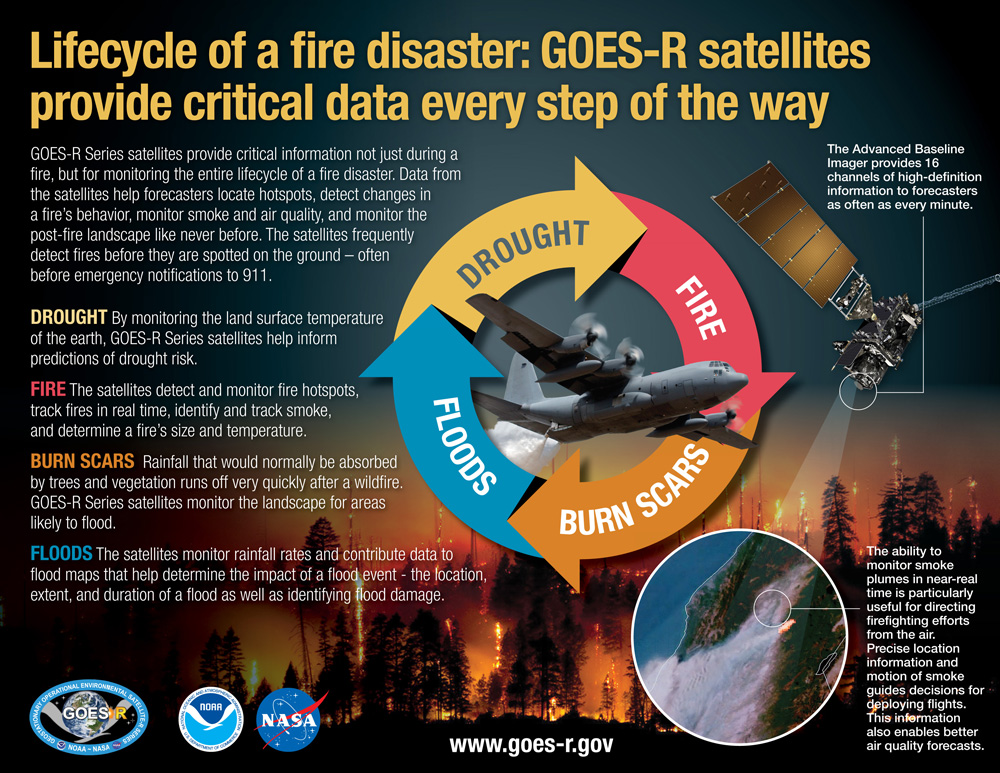 Lifecycle of a Fire Disaster

GOES-R Series satellites provide critical information not just during a fire, but for monitoring the entire lifecycle of a fire disaster. Data from the satellites help forecasters locate hotspots, detect changes in a fire’s behavior, monitor smoke and air quality, and monitor the post-fire landscape like never before. The satellites frequently detect fires before they are spotted on the ground – often before emergency notifications to 911. 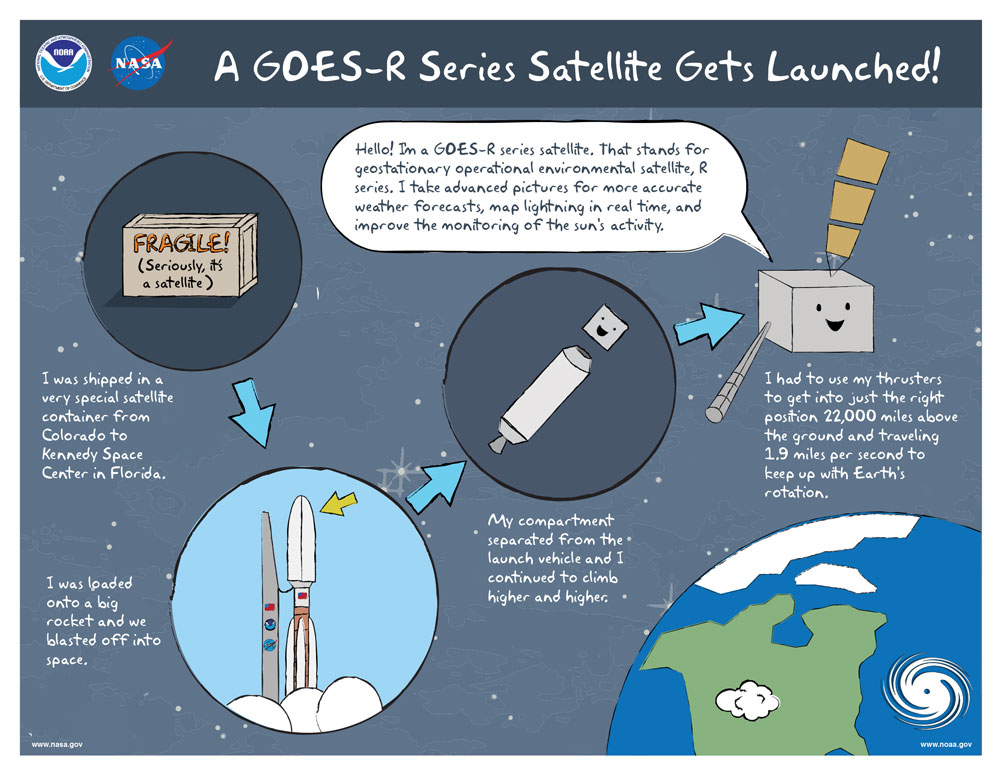 A GOES-R Series Satellite Gets Launched

GOES-R: The Future of Forecasting 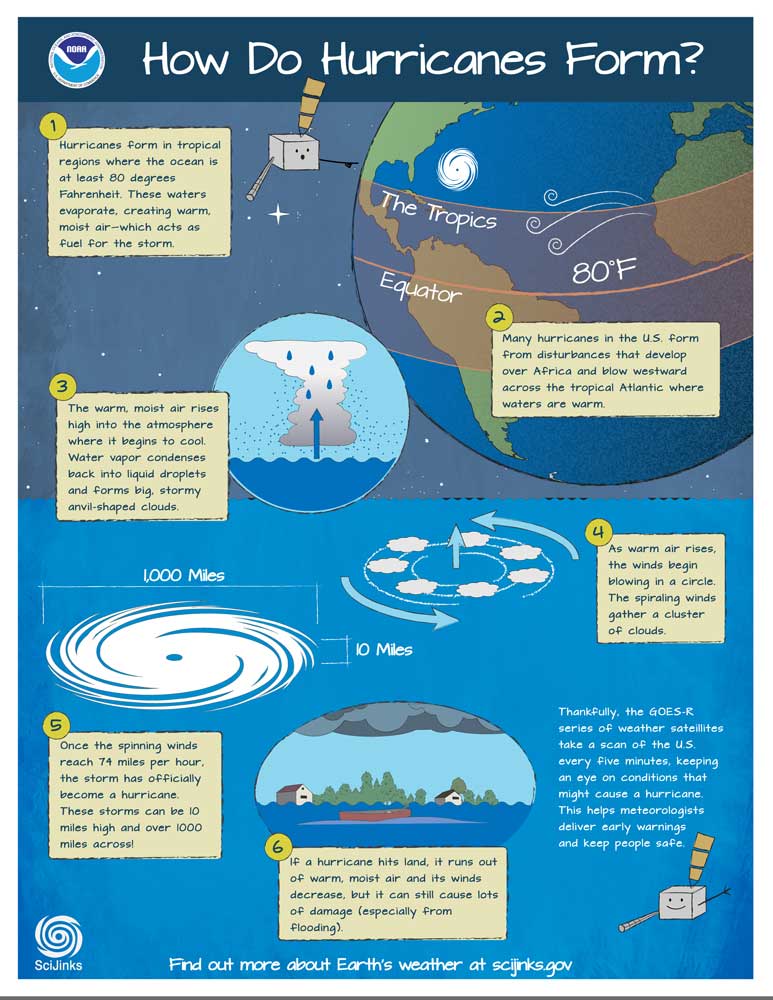 How Do Hurricanes Form?

Hurricanes are very large and intense storms. But where do these giant storms come from? Learn how hurricanes form and how GOES-R satellites can help predict a storm's intensity and track it minute-by-minute. This information allows meteorologists to deliver early warnings and help people stay safe. 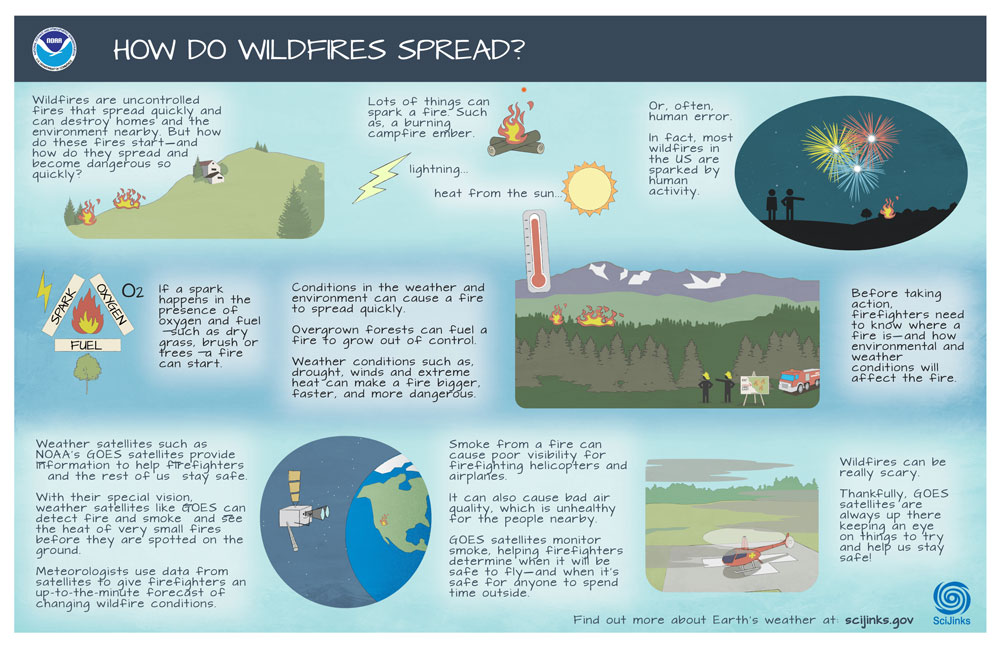 How do Wildfires Spread?

Wildfires are uncontrolled fires that spread quickly, destroying homes and the environment nearby. Conditions in the weather and environment—such as drought, winds and extreme heat—can cause a fire to spread more quickly. NOAA’s GOES satellites can provide information about these fires and conditions to help us stay safe.

Making a Weather Forecast with a GOES-R Series Satellite

The GOES-R Series provides information about lightning to warn of dangerous incoming weather. An instrument on the satellites, called the Geostationary Lightning Mapper (GLM), detects both in-cloud and cloud-to-ground lightning, almost as soon as it happens. These lightning observations can help alert people to dangerous and intensifying storms and may lead to new and better ways to predict and prepare for severe weather.

From weather and hazards on Earth to search and rescue and bursts of energy from the sun, GOES-R Series satellites see it all from 22,000 miles above our planet. 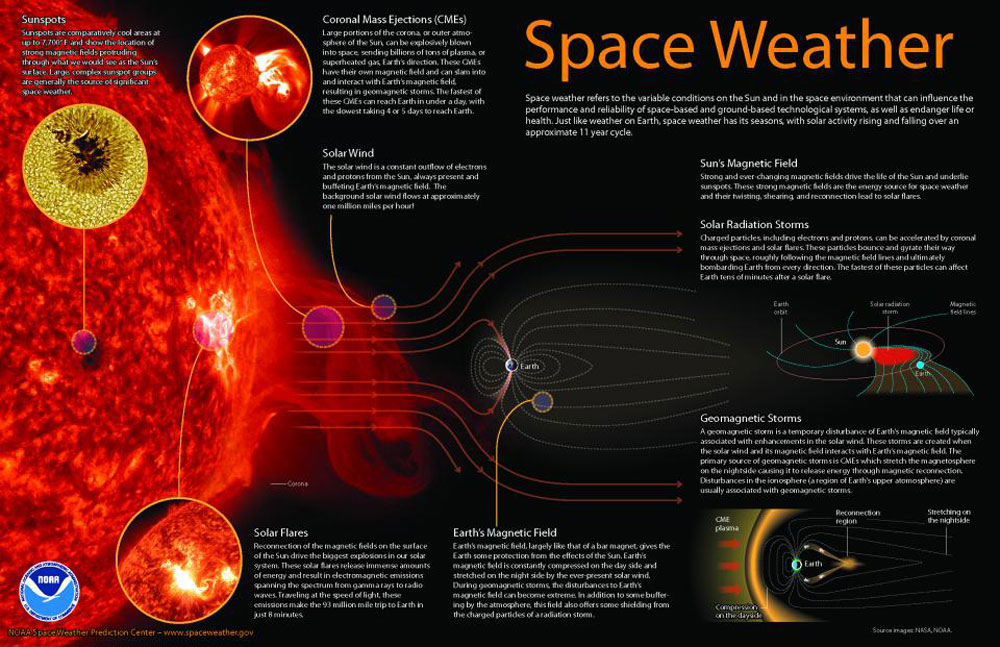 Space weather refers to the variable conditions of the sun and the space environment that can influence the performance and reliability of space-based and ground-based technological systems, as well as endanger life or health. Just like weather on Earth, space weather has seasons, with solar activity rising and falling over an approximate 11-year cycle.

What Causes a Thunderstorm?

When you see rain or snow fall from above, you’re watching precipitation in action! Where does precipitation come from and why does it fall in different forms?

Why don’t satellites fall out of the sky?

How do satellites stay in orbit? When a satellite is in orbit, it has a perfect balance between its momentum and Earth’s gravity.

Download Why don’t satellites fall out of the sky? infographic