Atmospheric rivers are long, narrow conveyor belts of moisture that move through the atmosphere. Strong atmospheric rivers can deliver enormous amounts of rain and high-elevation snow in California, Pacific Northwest, and Alaska, especially during the winter months. This can lead to serious flooding and mudslides, especially in California, but atmospheric rivers are also a critical water supply for much of the U.S. West Coast. On average, between 30 and 50 percent of annual precipitation in the west coast states occurs during just a few of these events.

Click the image for larger version in new window 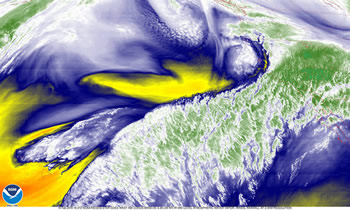 This water vapor imagery from the GOES West (GOES-17) ABI band 9 on February 14, 2019, shows an atmospheric river affecting California at 11:37 a.m. EST. Reds and yellows represent the warmer values, while the whites and greens the coldest. Credit: NOAA/STAR.

The total precipitable water product combines several ABI infrared channels to retrieve atmospheric moisture profiles and represents the total integrated moisture in the atmospheric column from the surface to the top of the atmosphere. This product provides useful information to weather forecasters and hydrologists to improve their situational awareness for a number of situations that require forecasting of events, including heavy rain and flash flooding. This information, as well as other quantitative products such as measured radiances and atmospheric motion vectors (satellite-derived movement of cloud and water vapor patterns), is also used in numerical weather prediction models.

Understanding and anticipating the role of atmospheric rivers is important for water and emergency management on the West Coast, particularly in California. GOES-17, recently designated NOAA’s GOES West operational satellite, is positioned to keep an eye on the western U.S., Alaska and Pacific Ocean, and provide advanced monitoring of atmospheric rivers among other weather phenomena and hazards. GOES-17 joins GOES-16, in operational service as GOES East, in providing high-resolution visible and infrared imagery and lightning observations of more than half the globe – from the west coast of Africa to New Zealand and from near the Arctic Circle to the Antarctic Circle.