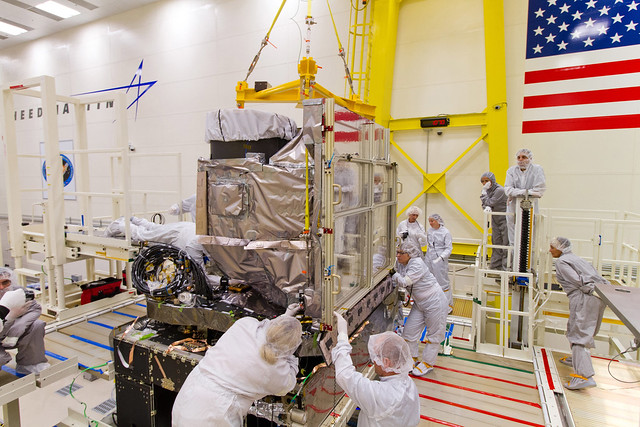 The Advanced Baseline Imager is the primary instrument on the GOES-R Series for imaging Earth’s weather, oceans and environment. ABI views the Earth with 16 different spectral bands (compared to five on the previous generation of GOES), including two visible channels, four near-infrared channels, and ten infrared channels. These different channels (wavelengths) are used by models and tools to indicate various elements on the Earth’s surface or in the atmosphere, such as trees, water, clouds, moisture or smoke.

ABI is a mission critical payload for the GOES-R Series, providing more than 65 percent of all mission data products currently defined.

ABI is a multi-channel passive imaging radiometer designed to observe the Western Hemisphere and provide variable area imagery and radiometric information of Earth’s surface, atmosphere and cloud cover. The instrument has multiple scan modes. In mode 4, or continuous full disk mode, the ABI produces a full disk (Western Hemisphere) image every five minutes. In mode 3, or flex mode, the ABI concurrently produces a full disk every 15 minutes, a CONUS image (resolution 3000 km by 5000 km) every five minutes, and two mesoscale domains (resolution 1000 km by 1000 km at the satellite sub-point) every 60 seconds or one sub-domain every 30 seconds. Mode 6, or 10-minute flex mode, which became the default operating mode for GOES-16 and GOES-17 in April 2019, provides a full disk image every 10 minutes, a CONUS (GOES-16) / PACUS (GOES-17) image every five minutes, and images from both mesoscale domains every 60 seconds (or one sub-domain every 30 seconds). All ABI bands have on-orbit calibration. Learn more about mode 6 in the User Information section of the website.

ABI is used for a wide range of applications related to weather, oceans, land, climate and hazards (fires, volcanoes, floods, hurricanes and storms that spawn tornadoes).

ABI improves every product from the previous GOES imager and introduces a host of new products.

Benefits from the ABI include improved tropical cyclone forecasts, fewer weather-related flight delays and airline incidences with volcanic plumes, improved production and distribution of electricity and natural gas, increased efficiency in irrigated water usage in agriculture, and higher protection rates for recreational boats in the event of a tropical storm or hurricane.

During post-launch testing of the GOES-17 ABI instrument, an issue with the instrument’s cooling system was discovered. The loop heat pipe (LHP) subsystem, which transfers heat from the ABI electronics to the radiator, is not operating at its designed capacity. The consequence of this is that the ABI detectors cannot be maintained at their intended temperatures under certain orbital conditions. Inadequate cooling of the infrared channels leads to partial loss of imagery during some of the overnight hours before and after the vernal and autumnal equinoxes.

Extraordinary recovery efforts greatly improved data availability from the GOES-17 ABI. As of April 2021, the instrument is delivering 94% of the data it was intended to provide. This decrease in data availability, from a peak of 98% after instrument recovery efforts, was expected due to graduation degradation of the ABI cryocooler and thermal surfaces over time. The team will continue to assess ABI performance and provide updates on when to expect degraded imagery due to saturated channels. Learn more about the GOES-17 cooling system issue and its effects on imagery.

Based on recommendations from the GOES-17 ABI cooling system anomaly Independent Review Team, the GOES-T and GOES-U ABI radiator/loop heat pipes have been redesigned to decrease the chance of future cooling system anomalies. The new design utilizes a simpler hardware configuration that eliminates the filters that are susceptible to debris.

One-minute infrared imagery of the powerful storm system that brought hail and tornadoes to the Southeastern U.S. on April 5, 2017. This imagery was produced with the “longwave” infrared band on the GOES-ABI, a new band not available on the previous generation of GOES. The one-minute scanning is also a new capability on GOES-16. As seen here, the imagery produced by this band offers spectacular views of meteorological phenomena, such as the colder cloud tops (shown in green/yellow/red) associated with these storms, in rich detail. Of particular note are what's known as "enhanced-V features" on some of the cloud tops, which are indicative of severe storm formation.