A NASA ER-2 high-altitude plane has taken to the air to complete phase one of the 11-week GOES-16 Field Campaign.

Why? Because, to put it simply, GOES-16’s data has to be as well calibrated and accurate as possible—lives depend on it.

“Are you seeing what I am seeing?”

Flying out of Palmdale, California, NASA’s ER-2 high-altitude plane and its suite of highly specialized instruments took to the air over the Sonoran Desert in Mexico (the largest desert in the Western Hemisphere) and the Mojave Desert in Ivanpah, California on March 23 and 28 to validate GOES-16’s ABI— the satellite’s primary instrument.

The plane made several passes over the large and spatially uniform desert regions, collecting an enormous amount of data and clocking nearly 18 hours of flight time. In a highly coordinated effort, each time the plane passed over a designated region of desert, scientists used the ABI to perform a series of special north-south scans of the corresponding area.

The plan seems simple enough, right? Collect two sets of data, compare the data, and see how well they match. However, validating a satellite’s imager, especially one as advanced as the ABI, is not so easy.

Before the data from the high-altitude plane and GOES-16’s ABI can be compared and analyzed, scientists must first verify that the plane’s instruments are accurate.

To do this, two teams of scientists took to the desert to collect data using an array of ground sensors during various segments of the plane’s flight. NOAA even enlisted the help of its own NOAA/NASA Suomi NPP satellite.

Phase one of the field campaign was timed so that the polar-orbiting satellite’s path would intersect with the high-altitude flights. By using proven, operational data from the Suomi NPP satellite and measurements gathered by hand in the desert, scientists were able to ensure that their measuring stick, the NASA ER-2 high-altitude plane, is accurate.

The real trick was doing this all at the same time. 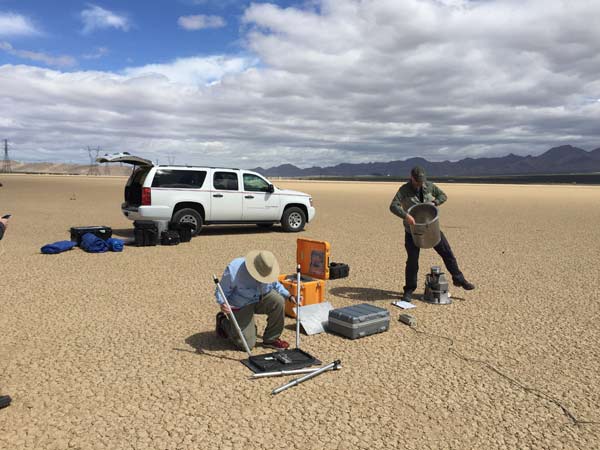 With this complex dance of scientists, satellites, and planes complete and data collected, there is still work to do. Scientists are currently analyzing the data from this first phase while simultaneously preparing for the second phase of the field campaign.

On April 11, The ER-2 aircraft will fly from Palmdale, California to Warner Robins Air Force Base in Georgia. From there, the GOES-R Team will initiate the next phase which will occur from April 12- May 18.

During this period the plane will make similar flights over the eastern United States and adjacent oceans to check the data collected by GOES-16’s Geostationary Lightning Mapper instrument. The plane is scheduled to fly in lightning-producing storms over both land and ocean while the satellite monitors them from space.

Previously, during a test flight on March 21, nearly seven hours of data were collected over severe lightning-producing storms east of the San Francisco Bay area. These data were collected simultaneously with ground-based lightning detection networks and a lightning imager on the International Space Station. Similar sensors will be used during phase two to verify the satellite’s data.