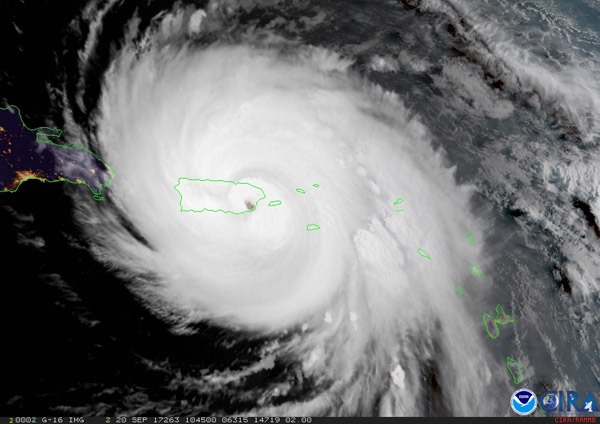 GOES-16 geocolor image of Hurricane Maria over Puerto Rico as it made landfall on September 20, 2017. Credit: CIRA

Although not yet operational, data from NOAA’s GOES-16 satellite proved vital in forecasting operations for Hurricane Maria as it neared Puerto Rico on September 20, 2017. Radar in San Juan went out at 5:50 a.m. EDT, just before Maria made landfall on the island. Land-based radar is used during storms to provide detailed information on hurricane wind fields, rain intensity, and storm position and movement. With this critical technology disabled and a major hurricane approaching, forecasters were able to utilize data from NOAA’s latest geostationary satellite, GOES-16, to track the storm in real-time.

GOES-16 is able to scan a targeted area of severe weather as often as every 30 seconds, a capability not available with current GOES. This rapid scanning rate is allowing forecasters to analyze cloud patterns and track Maria in real time. GOES-16 also has three times more channels than the current GOES imager, providing better estimates of the structure of tropical cyclones and their environments. The four-fold improvement in resolution from GOES-16 provides greater accuracy of feature attributes, allowing for better characterization of the eyes of hurricanes.

GOES-16 captured this infrared imagery of Hurricane Maria over Puerto Rico on September 20, 2017. The dark red color, like that near the eyewall of the storm, corresponds to areas of great intensity. Credit: CIRA.

In the absence of radar, GOES-16 data helped fill the void and allowed forecasters to keep an eye on Maria, which made landfall on September 20 near Yabucoa, Puerto Rico, around 6:15 a.m. EDT as a category 4 hurricane. Forecasters continue to use the new capabilities available from GOES-16 to track the storm.

GOES-16, launched in November 2016, is currently in a central checkout orbit of 89.5 degrees west longitude, where it is undergoing an extended validation phase. The satellite will be relocated to its operational location as GOES East at 75.2 degrees west late this year.