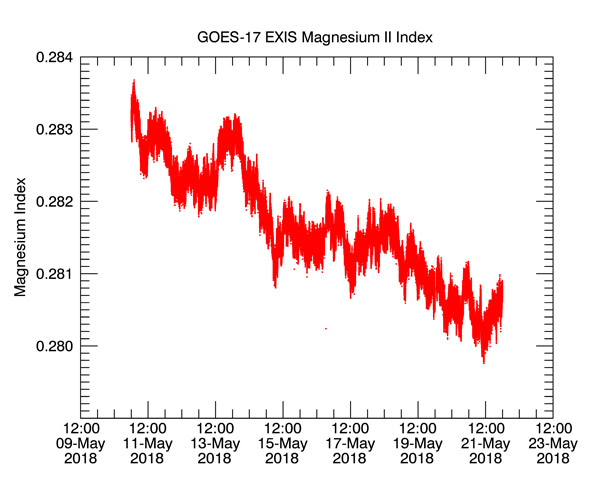 The plot above shows the first 10 days of the Magnesium Index from GOES-17 EXIS measurements. It shows that solar activity is slightly decreasing during this time period, with no major solar flares. EXIS is able to measure changes in the Magnesium Index with better precision and much higher frequency than for any previous satellite, producing unprecedented information about space weather. Credit: NOAA/NASA

EXIS continually monitors the brightness of the sun. Every 30 seconds, EXIS will create a picture of the sun’s output in the part of the spectrum which includes X-ray and ultraviolet light -- wavelengths that are absorbed by the outermost layers of our Earth’s atmosphere and ionosphere.

Space weather storms are caused by rapid changes in the sun’s output. When X-rays from solar flares reach Earth, the change in the ionosphere can block high frequency radio communication, which is the primary communication path for commercial airlines. Solar X-ray and ultraviolet radiation also affect other radio frequencies such as those used for satellite communication and navigation. NOAA will use EXIS measurements to issue warnings of radio blackouts during solar flares.

As the upper atmosphere responds to the ever-changing sun, satellites feel its impact. The friction between a satellite and the atmosphere, known as satellite drag, is influenced by solar activity. Precise knowledge of the sun’s output, such as those provided from EXIS measurements, is required to predict the positions of satellites in orbit.

One of the improved space weather measurements made with EXIS is called the Magnesium Index. Much like the UV index that predicts sunburn risk, the Magnesium Index is a number that represents the ultraviolet variability of the sun. The Magnesium Index is used for monitoring long-term and day-to-day changes in solar activity and the resulting upper atmosphere changes at Earth. In the past, the index was only measured a few times per day. GOES-17’s EXIS makes measurements of the index every 3 seconds (i.e., 28,000 times per day!) and can now be used to monitor rapid changes in the sun associated with solar flares.

The EXIS instruments on GOES-16 (launched in November 2016) and GOES 17 (launched March 1, 2018) were built at the University of Colorado’s Laboratory for Atmospheric and Space Physics. Both instruments are working well.